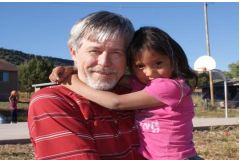 Dr. Michael Richard Householder was born February 3, 1955 in Knoxville, Tennessee. At age ten, Mike decided to follow Jesus Christ as his Lord and Savior and he was baptized. Mike studied at and graduated from:

Throughout his ministry, Mike has been a minister in Indiana and Tennessee, a professor at Platte Bible College, and an instructor in the LAMP program at Johnson Bible College. Also, Mike and Jacque were missionaries in Russia and Poland between the years 1993 and 2000. Since 1995 and currently, Mike is the Director of Global Church Growth Discipling Ministries.

At age 17, Dr. Michael R. Householder was called by God into full-time Christian service. At that time, Mike was not certain what this service would be or where it would be carried out but Mike was willing to allow God to lead him. While at Johnson Bible College, Mike was given the opportunity to work for TCM as an intern in Eastern Europe. This was a life-changing experience for Mike. He recognized that God was calling him to be involved somehow and someway in foreign missions around the world.

Between 1975 and 1994, God began laying the foundation for the ministry that He had planned for Mike. Mike joined and guided five short-term mission trips to Eastern Europe between 1975 and 1988. In 1980, the first year as being a minister at a church located in Indiana; Mike began discipling and baptized 60 people. This is when Mike realized something needed to be done to help new disciples continue their growth in their new life as disciples of Jesus Christ. Therefore, Mike began developing his material, “Walk in Discipleship” series. Then in 1992, God opened an opportunity for Mike to begin leading a fulltime ministry in Russia.

In 1995, Mike founded Global Church Growth Discipling Ministries. Also that year and with Poland being on his heart, Mike and his wife Jacque moved to Poland. However this move would be a short-term move because in December of 1999 Jacque discovered she had breast cancer. This brought Mike and Jacque back to the United States for her treatment. Her cancer is now in remission.
Subsequent to the move back to the United States, Mike has continued to be actively involved with foreign missions, world-wide. Churches in Russia, Poland, Mexico, Antigua, and America have all been trained in the principles of discipleship and church growth.

In 2004, Global Church Growth Discipling Ministries was incorporated into a 501c3 mission.

Ms. Jacque Householder was born January 2, 1953 in Knoxville, Tennessee. At age 30, Jacque decided to follow Jesus Christ as her Lord and Savior and she was baptized. Jacque too served with Michael in Eastern Europe, where she worked with the women and youth. She taught English as a second language and has a certificate in ESL.

When not traveling with Michael, Jacque spends time at home with their three children and five grandchildren. Also, Jacque is involved at their home church, Seymour Heights Christian Church, where she facilitates a women’s Sunday School Bible class and the church’s Mothers Day Out program